The Rise of Algae-Based Dyes

Our world is made of colors. From the clothes in our closets to the food we eat, we constantly find bright and irresistible colors. Most of the time we are so mesmerized by the aesthetics of our products that we never realize the true origins of where these colors come from.

THE DRAWBACKS OF FOOD DYES

Traditionally, food colorants or food dyes were created using natural ingredients found in our environment, at the turn of the Industrial Revolution synthetic dyes from petroleum began to replace natural dyes. Synthetic dyes quickly became favorable as they are cost-effective, easy to make, and consistent in color [1].

Unfortunately, the rise in synthetic dyes brought several serious environmental and health concerns. Creating petroleum-based synthetic dyes emits large quantities of carbon, damages fragile ecosystems, and contaminates water bodies and groundwater. Several regions globally have warning labels on products containing artificial food dye to alert customers of its detrimental health impacts. As more consumers became concerned for their health and the environment, the demand for sustainable, natural, and easily accessible food dyes has never been higher. By 2027 the natural food colorant market is expected to reach $3.2 billion [2], and with an increasing need for a safe food dye made from nature-based ingredients - this brings us to algae.

THE COLOR SPECTRUM OF ALGAE

Algae are a group of aquatic organisms capable of photosynthesis; they can be microscopic in size or 60 m in length [3]. The vast array of colors algae occurs in makes it a promising and sought-after dye source. Algae are categorized based on the pigment color present. While all algae contain chlorophyll pigment, the accessory pigments present provide each alga with its distinct color i.e carotenoids (yellow, orange, and red), phycocyanin (blue), and phycoerythrin (red) [4].

The ability of algae to create the full spectrum of colors is due to the pigment’s reflection of different light energy. Each pigment reflects a specific wavelength of light energy and absorbs the rest. For instance, the red photosynthetic pigment- phycoerythrin present in algae absorbs light at wavelengths between 400 - 600 nm and reflects the rest around 625 - 740 nm. The reflected light corresponds to the red wavelength on the visible light spectrum as seen below, which causes the algae to appear red.

Similar to how we perceive different colors based on the light around us, the pigments present in blue-green algae are capable of altering the amount of pigment depending on its surroundings. This ability of algae to change its pigments to adjust to the lightwaves absorbed is called chromatic adaptation [5]. For instance, algae growing at greater depths in the ocean will start to produce a higher level of light-absorbing pigment for photosynthesis to sustain itself, which can change its color. Through chromatic adaptation, specific algae pigments can be created to meet client demand. Chromatic adaptation, along with the extensive color varieties algae exists in can eventually replace the extensive list of synthetic dyes used.

ELECTRIC SKY AND BEYOND

Globally several researchers are taking advantage of the varied colored pigments found in algae and its light absorptions, creating uniform and long-lasting dyes which can compete with present market options.

At Spira, Electric Sky is created using spirulina, algae containing phycocyanin and chlorophyll giving its blue-green tint. With large food manufacturers struggling to find a natural replacement for blue food dye [6], Electric Sky has great potential as it does not alter the taste of a product while being non-toxic and bright in color. Although there is still some more research that needs to be conducted to find alternatives for the full spectrum of colors on a large scale, algae pigments hold a very promising future. The Gift of Algae: A Holiday Gift Experience Idea Guide 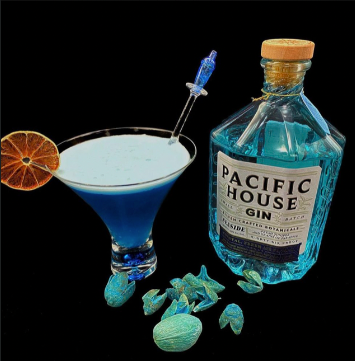